Another Somewhat Weekly WhatIsIt Blog Posting... Who are these people?

Posted by Janel Bedor on Monday, 27 May 2013 in Weekly WhatIsIt?

This week we are featuring three autographed photos from our Hewitt St. Neenah Sale this week.  There are quite a pile of autographs at this sale.  One of the sons of the woman who used to live in the house, with the stage name Jeff Dean, was an actor.  We were told he was in a movie called the Rabbit Test (IMDb listing:  http://www.imdb.com/title/tt0078133/fullcredits).  However, he is not listed in the credits.

Posted by Janel Bedor on Saturday, 04 May 2013 in Weekly WhatIsIt?

This weekend at our Neenah estate sale, we found this unique treasure.  Initially we did some pricing research on this piece and while it was priced appropriately, we did not truly understand the significance of what we had.  Now we know thanks to the keen knowledge of our estate sale regular shopper Darrell.  We'll share what we learned from Darrell and some additional research next week, but we'd love to hear from you...  What is this and what is its significance???

Posted by Janel Bedor on Saturday, 20 April 2013 in Weekly WhatIsIt?

We encounter a variety of oddball and one of a kind items in our estate sale adventures.  We've created a weekly (someties) WHATISIT blog post to explore some of our interesting or reminiscent treasures! We held our last flea market for the year this weekend and had over 40 vendor booths filled with unique items.  One vendor, a 25 year flea market veteran, Ron Liszewski, had a treasure from the 1920's.  We've posted some pictures of this item below.  We'd love to hear your theories about this unique antique.  What could it be??? 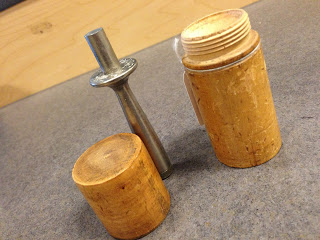 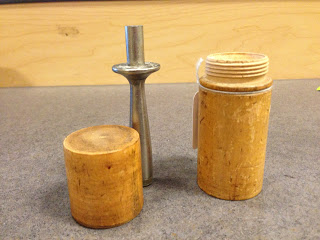 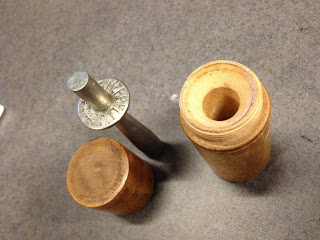 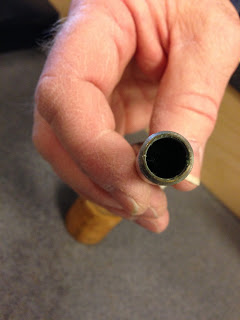 We've got a meteorite detector for sale this week. Its not your average detector! This one was built in the 1950's by a Lawrence University professor (Appleton, WI) and was the first ever patented detector. Unfortunately, it doesn't come with a manual or its power cord so we are unable to test it. There is also the tiny matter of us not having any meteorites to detect (yes, Josh is "acting" in the picture). The detector we have for sale consists of a round, wrapped copper tube which is to be worn over the shoulders via canvas straps. The unit weighs about 50 pounds. One side has a place in which to plug a cord and the other has a small "read out" area and white button. This is truly one of the most unique pieces we've had walk through our doors.

This precursor to the Heddon Stockwell-type Meteorite Detector was invented by Lawrence University professor William F. Read. Most information published about the detector actually comes from the second model built by Read which was wheelbarrow mounted (he was trying to perfect the Heddon Stockwell wheelbarrow mounted detector. This first model was worn over the shoulders as you can see in the above picture. You can read more about how the wheelbarrow model works in this article (which is also where I pulled the information in this paragraph from): http://adsabs.harvard.edu/full/1965Metic...2..369R

Additional information written about and by William F. Read can be found at these links as well as information about meteorites found in and around the Fox Cities: http://www.jstor.org/pss/3627173 http://adsabs.harvard.edu/full/1969Metic...4..244R http://digicoll.library.wisc.edu/cgi-bin/WI/WI-idx?type=div&did=WI.WT1960.WFRead&isize=text http://www.geocaching.com/seek/cache_details.aspx?guid=b68533dd-054d-4624-a2b0-18a65e5bc85d

The year was 1974, bobby-socks, greasers, and rock-n-roll was Americana at it’s best…

Television was filled with game shows, soaps and a popular sit-com called Happy Days. While he started out as a secondary character, Arthur H. Fonzarelli, or ‘the Fonz’ ended up being the spotlight in the lives of those on-screen and in real life.

He was a guy’s guy, greased back hair, leather jacket and motorcycle. All the girls wanted to date him, all the guys wanted to be him. He could walk in a room and start a fight, or stop a fight, which was actually the reason he and Richie became friends, but that’s another story. Even though he was a high-school drop-out (eventually getting his diploma), Fonzi was celebrated for the soundness of his moral compass. If the Fonz told you something, it was the truth, the Fonz could be trusted, and if you were his friend, he always had your back.

We celebrate our characters of TV who touch our lives through posters, music, dvd’s, and merchandising. A pair of Fonzie socks, of all things, have shown up at the shop. Granted they aren’t signed, but if they were, I would probably want them myself. Recalling the singular advise Fonzies father gave him, they have never been worn in the rain, for that matter, they have never been worn at all. So, if you’re a Fonzi fan, add this to your collection, pack it away for a day of nostalgia, or put it in your showcase next to the leather jacket and plastic comb that help us step back and remember ‘Happy Days’ and ‘The Fonz’.